Condoms and consent: What is stealthing?

Consent is such an important topic to discuss and one thing I don’t hear a lot about when discussing the nuances of consent is stealthing.

What even is stealthing? This may be a word you have heard, or you actually may know the concept without knowing there is a word for it (it’s 2020, there is a term for everything). Stealthing is the act of removing a condom during sex without the consent of a partner. The sexual act had been consensual, and there was an agreement to use a condom. It can also be the failure to use a condom, even though using a condom was agreed upon.

This is a relatively new term, so not a lot of countries or states have laws that cover stealthing specifically, but know that a non-consensual condom removal is a form of sexual assault. As laws do not cover all the nuances of consent, I want to break down how stealthing violates consent and why consent for condom usage is needed.

I like to use the FRIES acronym from Planned Parenthood to give a comprehensive look into what elements that make up consent. 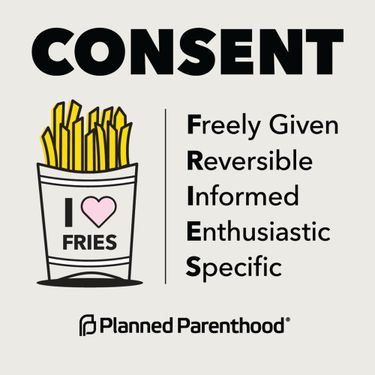 In this acronym, F stands for Freely given, so that means no one is coerced, forced, or threatened into any sexual act. R is Reversible which means the consent can be taken away at any time, meaning you can change your mind for any reason. I is for Informed which means you know exactly what you are consenting to. E is for Enthusiastic, which means everyone wants to do what they are all consenting to and nothing feels like it is expected. Lastly, S is for Specific, which you know what particular sexual acts you are consenting to, and consent is not presumed for anything and everything. You will need to ask for consent for different sexual acts.

When thinking about consent in relation to stealthing, Informed, and Specific are 2 big categories that stealthing violates. When you are thinking about having some type of sex with someone, you are consenting to that act specifically, but also how it will be performed i.e. with a barrier method or not.

Everyone has different boundaries when it comes to sexual acts, and it can change depending on their sexual partners and whether it is something they want to do at that point in time. Regardless of the partner, you need to ask for specific consent for different sexual acts.

The term sex can describe so many different types of sexual acts, so you have to be specific.

Using something like a condom is a conversation that is had before sexual activity begins, and if you choose to use a condom, then you are consenting to have sex with a condom. If someone no longer wants to use that condom, that is not what you specifically consented to and therefore another discussion needs to be had to ask for consent without a condom.

Without specific and informed consent, the act is sexual assault.

Not only is this act a form of assault but it poses a lot of health risks. Not using a barrier method creates the risk of transmission of sexually transmissible infections (STIs) and HIV, as well as increasing the risk of pregnancy.

When deciding to have sex with someone, it is always important to know their STI status. That helps you both make an informed decision on whether you want to have sex at the moment (or delay it), what type of sex you want to have, and what contraceptive and/or barrier methods are being/will be used.

Stealthing also has a significant impact this has on one’s mental health. Any form of sexual assault can massively impact your well-being and it can increase the risk of anxiety, depression, and post-traumatic stress disorder (PTSD). Not only that but it can impact one’s ability to trust and engage in romantic and sexual relationships.

Stealthing is, unfortunately, becoming more common in society with a 2018 study in Melbourne finding 1 in 3 women and almost 1 in 5 men reporting being stealthed.

These acts are abusive and violating and are in no way your fault if they happen to you. They can equally happen with a person you just met or with someone you are in a relationship with.  Stealthing in particular is a cruel and deceptive form of sexual assault. It is an act of betrayal and coercion. Consent should be informed and specific and is violated when you remove a condom during sex when that wasn’t consented to.

If someone uses a line like “it just doesn’t feel as good” or “I don’t like the way it feels” about wearing a condom, know that they are saying this to pressure you, and you cannot consent if you are being pressured. Condoms and consent are meant for safety and you should always feel safe during sex.

If this article has brought up distressing feelings around sexual assault, please get into contact with these services:

Each of these services has online chat options available.

Also, read “The impact of Sexual Trauma on the brain and false reporting“

Joanna is a recent graduate of a Master of Public health and does work in sexual health promotion and health literacy.

She is a passionate advocate for comprehensive sex education, mental health, and the rights of womxn and the LGBTQIA+ community. Joanna loves to talk about all things health and is based in Melbourne, Australia.
@joanagnostou instagram Facebook
View all their posts

Getting Started with Bondage

Getting Started with Bondage